Love at the Lighthouse 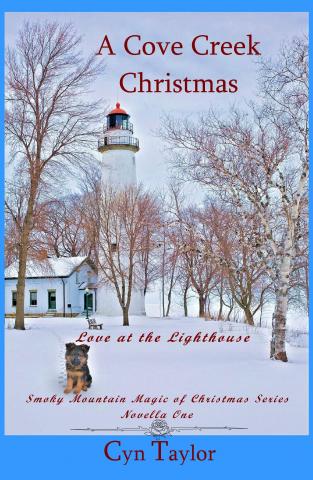 Hello again. It's been so long since I posted I'm sure many of you thought one of my characters had come to life and done away with me. Fortunately, that can only happen in books. Life is just waaaaay too busy, right?

SO . . . a funny thing happened on the way to book number one in the Smoky Mountain Magic Series Truffles & Kisses. Apologies to all who have been anxiously awaiting that book. It's still in process and coming, just a bit later than planned.

A new character spoke to me and demanded that I write her story first. That being said let me introduce you to Chloe Coleman. She is the protagonist of the first Smoky Mountain Christmas Series of novellas, A Cove Creek Christmas ~ Love at the Lighthouse. It combines romance with mystery with . . . well, please read it when it comes out and you'll see. Here is a glimpse of Chloe's story.

"Forgotten roots, abandoned family, lost love and three Christmas tragedies all made Chloe Coleman who she is today. When forced to chose, will she stay with the life it took ten years to build, or put aside the memories of a devastating past to become the person she is called to be in the present?

Chloe Coleman has worked hard to forget the people she abandoned in her hometown of Cove Creek Tennessee, along with the life changing events that took place there for three consecutive Christmases. She never thinks about Nathan Sharp, the high school sweetheart who jilted her when he moved away for college. Well, almost never. A death in the family brings Chloe back to the mountains of Cove Creek during the Christmas season, where she gets a near lethal dose of community due to her Aunt Mae’s manipulations from beyond the grave.

Nathan Sharp has reset his roots so deep into Cove Creek’s future he never plans to leave again. Once Chloe returns, Nathan knows he has the power to demand that his former fiancée spend a lot more time in her hometown than she’d planned, or wanted. But he'd rather she make that choice on her own. Reconnected with Chloe after so many years, he plans to fight to win her back, despite the fact that she deserted him less than a month after he left for college. He had always believed Chloe belonged with him, now he only has to prove that to her. His hope is that Chloe’s memories of their time spent at the lighthouse where he proposed will stir up old longings from their youth.

Before they can find their way back to each other the two will have to overcome the obstacles of a past misunderstanding, a homeless vagrant who is not what he seems, townspeople who want to push them together for their own personal gain and family who will do whatever necessary to keep them apart."

Now, what, you may ask, is a lighthouse doing in the mountains of Tennessee? And why write a Christmas story this time of year? Hopefully you will be curious enough about that to read the book when it becomes available. And keep in mind there is a difference in a Christmas story and a story that is set during the Christmas season. I am planning a release date of April 1, unless another character digs into my brain and demands attention.

Until then, here is the proposed cover for A Cove Creek Christmas, designed once again by the fabulously awesome Rachel Rhule. Isn’t that the cutest puppy ever?!