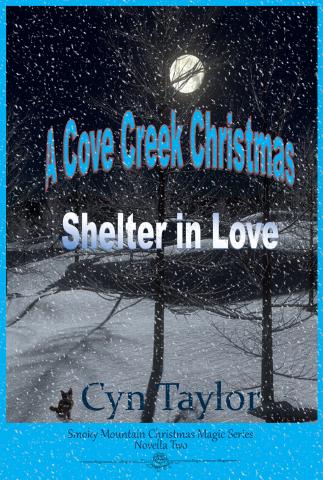 A country bumpkin cop, a girl from the big city, a feral feline, and a hidden bomb shelter make for a merry Christmas mix-up.
When Grace Bridges arrives in Cove Creek to be the Maid of Honor at her best friend’s wedding, the greeting she receives from a local lawman is less than welcoming. Trying to talk her way out of a speeding ticket ends with Grace sequestered in the local jail accused of animal abuse.
Sheriff Clayton Johnson isn’t completely sure how to handle the tough acting city girl he pulls over for driving 45 in a 20-mile–per-hour speed zone. What he is sure of, is that anyone who abuses an animal is deserving of swift and uncompromising justice; even this raven-haired bombshell who takes his breath away with her first sneer.
A night in jail might cool Grace’s temper, but it heats up Clayton’s response to her constant name calling and backwoods jokes; not to mention his reaction to having her under his thumb for a couple of hours.
It will take a mountain lion attack and Grace getting stuck in a secret bomb shelter while attempting to save a kitten for the second time, to bring these two even close to an understanding of the other’s true intentions.
Meanwhile, Grace’s friend’s wedding plans are missing not only the Maid of Honor, but the Best Man as well.
It’s up to Chloe’s canine friend Mr. Darcy to save the day. But will he be able to sniff out the antiquated safe spot, rescue Grace, Clay, and a kitten, and get everyone to the church on time?